“Organized religion has proved to be conservatively tardy. The prophets have usually led the people in religious development; the theologians have usually held them back.” [UB, 102:8.6]

Thought Adjuster: “This quote made you pause as it nails down what impairs sound religious development.

Prophets are visionaries who provide sneak previews into the future to assist their audience in forming better-informed decisions. These wise men selflessly dispense their enlightenment as a catalyst for the forward evolution of planetary spirituality. Due to the controversial nature of their predictions, many of these non-conformist oracles have been put to death by fear-driven religious fanatics.

Sadly, narrow-mindedness and narrow-heartedness impair the organic expansion of your soul. They stifle it, depriving it of the life-sustaining oxygen particles released by truth in motion.

In order to be self-validating, truth has to be applicable, logically bridging the invisible realm of thoughts with the tangible one of reality—thoughts manifested on the physical plane. If what is proclaimed to be true does not satisfy your soul’s natural appetites, search elsewhere. It is what young Jesus did. He was quick at picking up on the paradoxes of man-made postulates presented as authoritative teachings, while they were merely subjective interpretations far from infallible.

“Religion is ever and always rooted and grounded in personal experience. And your highest religion, the life of Jesus, was just such a personal experience: man, mortal man, seeking God and finding him to the fullness during one short life in the flesh, while in the same human experience there appeared God seeking man and finding him to the full satisfaction of the perfect soul of infinite supremacy.” [UB, 102:8.6]

Displayed under such a beautiful light, religion becomes attractive, as it sums up the longings of your soul, giving you the insurance that your personal quest is fully reciprocated by the divine Presence that dwells within you, eager to seal such an everlasting bond between YOU and HIM—a genuine love that by far supersedes a watered-down love-by-proxy instilled with humanly concocted contaminants of shame, guilt, and fear that denature the sublime quality and universal appeal of divine love.” 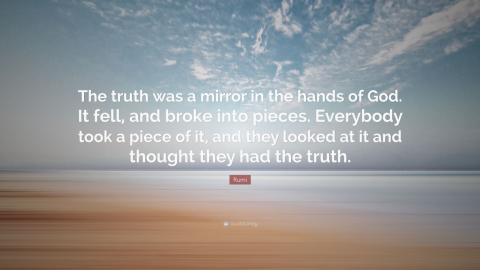