Willpower is the ability to control one’s own actions, emotions, and urges.

Thought Adjuster: “Unquestionably, the will is a driving force that sets things into motion.  Faced with their lack of productivity, many make the excuse that their insufficient willpower leads them to turn down or abort worthwhile pursuits.

How, then, can you amplify it?  Upgrade its quality from substandard to premium!  Synergize it by blending into it the revitalizing force of love—thus making it ‘godlike.’ You then get to ride on the coattail of the all-loving and all-pervasive Divine Willpower and benefit from its mighty ‘drafting’ effect.

Drafting is an essential technique in road racing.  Scientist Paul Doherty explains it as follows: The bicyclist, as he moves through the air, produces a turbulent wake behind himself.  It makes vortices that generate a low-pressure area behind him and an area of wind that moves along.  If you can move into the wind behind the front bicyclist, you can gain an advantage, as the low pressure and the eddies push you forward. He further explains that, surprisingly, drafting helps both the leader and the follower, as they put out less energy to cover the same distance. Cyclists who ride together as a ‘peloton’ can save up to 40 percent in energy expenditures.

Shouldn’t God wear the ‘yellow jersey’ in your collective long-distance race toward the finish line of eternity? By sporting His Teams' vibrant colors, you will undoubtedly work your way toward the front of the pack and, cheered up by your steady progression, witness a drastic upward surge in your willpower voltage.” 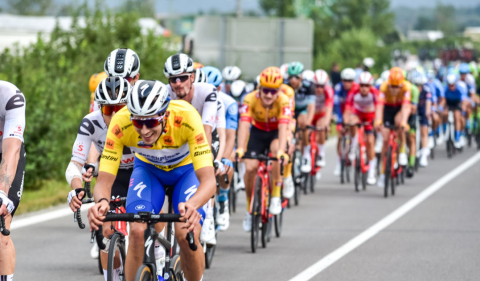