Thought Adjuster: “It would tremendously propel your world at large—you included—toward its ideal state of light and life if its citizens led sound prayer lives, as authentic prayers detain great powers of positive transformation if prompted by caring intentions.

Jesus admonished his audience to pray on behalf of their detractors—not against them, as it defiles this holy act. Hostile petitions are nothing but an abomination to the Father.  You can gain much enlightenment about genuine prayers by reflecting on the sublime quality of Jesus’ spiritual life.

His heartfelt invocations were selfless acts of intercession. When divested of the crucial elements of love, empathy, or compassion, prayers are nothing but a despicable expression of hostility.  They ask the impossible of the divine Godhead.  How could he ever shrink the scope of his all-pervading unconditional love to favor your petty and unrealistic negative wishful thinking?

Jesus never childishly ran to the Father to tattletale on his planetary siblings in a misguided attempt to earn his sympathy and prompt him to meter out severe punishment on their heads without any due process.

Seldom did he pray for himself.  He did turn to his indwelling divine Fragment for guidance and to strengthen his resolve.  He was—understandably so—grievously oppressed, heavy-laden, and sorrowful in the fateful hours preceding his arrest. He prayed, “My Father, I came into this world to do your will, and so have I. I know that the hour has come to lay down this life in the flesh, and I do not shrink therefrom, but I would know that it is your will that I drink this cup. Send me the assurance that I will please you in my death even as I have in my life.” [UB182:3:1]

At the apex of his emotional and physical agony, the only words he uttered were: “Father, forgive them, for they don’t know what they are doing.”

“He could not have so mercifully and lovingly interceded for his executioners if such thoughts of affectionate devotion had not been the mainspring of all his life of unselfish service. The ideas, motives, and longings of a lifetime are openly revealed in a crisis. [UB 187 :2 :4]

Make your prayers count that way!” 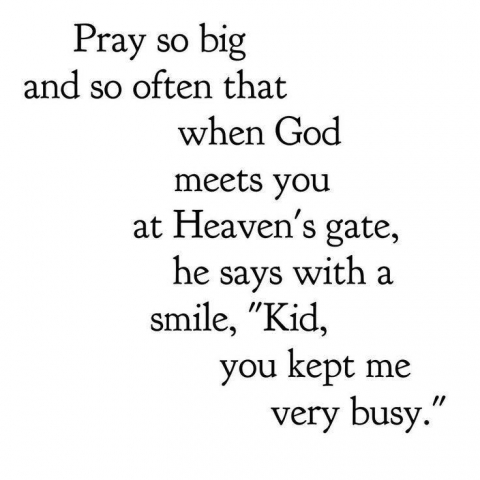