“After more than five weeks of unbroken communion with his Paradise Father, Jesus became absolutely assured of his nature and the certainty of his triumphs over the material levels of time-space manifestation.  He fully believed in, and did not hesitate to assert, the ascendancy of his divine nature over his human nature.” [UB 134:8:5]

Thought Adjuster: “The 32-year-old Jesus spent six weeks in solitude on Mount Hermon in communion with his Thought Adjuster. “He requested that he be permitted to go up to his last struggle with the realities of mortal existence alone. [. . .] With only his indwelling Adjuster to guide and sustain him, he finished “the mortal task of achieving the circles of mind-understanding and personality-control. The indwelling Adjuster also completed his assigned services.  “The mortal goal of this earth creature was there attained. Only the final phase of mind and Adjuster attunement remained to be consummated.” [UB 134:8:5]

If you were an investigative journalist, you would gather from these statements that the ground-breaking events that took place on Mount Hermon had all to do with the humanity of Jesus. If he could transcend his human nature, thus asserting the "ascendency of his divine nature” over it, so can you!

How did he set such a spiritual precedent? By maintaining an unbroken communion with his indwelling Father Fragment, remaining anchored in its light of truth while deflecting the malevolent lures of dark spiritual forces, intent at clipping his spiritual wings to bring him under their dominion—not the other way around.

Under relentless spiritual attacks, Jesus ever remained a dedicated freedom fighter, thus mapping out the next leg of your spiritual ascension—heroically taking you from your humanity to your super-humanity.

Remember this as you wage your battles. By remaining firm and God-centered, you will establish your sovereignty over your baser instincts—thus emerging as an incorruptible Child of God after fending your way through the Seven Psychic Circles of spiritual ascension.” 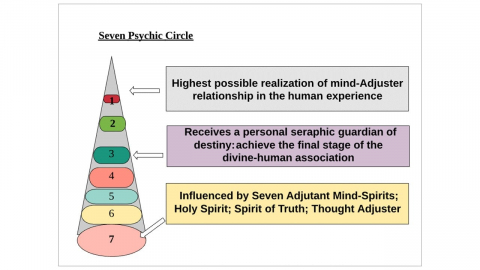