“The personality of Jesus was preparing for his great change in attitude toward the world.  These were the in-between times, the transition stage of that being who began life as God appearing as man, and who was now making ready to complete his earth career as man appearing as God.”  [UB 134:1:7]

Thought Adjuster: “The above narrative refers to the inner shift that occurred in Jesus at age 30. Far from being an emotional midlife crisis, it was a sublime spiritual breakthrough. He shattered the glass ceiling of the gravity-bound human condition, opening a way toward its attainment of immortality status as full-fledged Light beings.

In impeccable words supported by flawless actions, He spelled out the fundamentals of ‘Ascension 101.’ Therefore, His life is ever relatable to all ambitious spiritual seekers who wish to transcend their ephemeral caterpillar nature to soar as colorful butterflies in higher spiritual planes.

Jesus was a ‘descending’ Divine Son, who chose to incarnate as one of you—not to meet you half-way along your ascension trail, but to accompany you from Ground Zero of your spiritual emergence. He did not appear among you as a grown man, as Machiventa Melchizedek did as the Sage of Salem, but received the spark of life in Mary's motherly womb. He chose to be born as a helpless babe, amnesic about His divine origins, thus evening the playing field to coach you toward greatness.

He laid the groundwork for all phases of a victorious human life trajectory—that is, until He was rightfully proclaimed as a Divine Son, at its momentous baptism in the Jordan River:  “And a voice from heaven said, "This is my Son, whom I love; with him I am well pleased." [Matthew 3:17]

Such a day will come for each one of you. It will be the stage of your official spiritual graduation. Jesus will deliver the commencement address by cheerfully proclaiming: “This is my child, whom I love; with whom I am well pleased” and proudly hand out your hard-earned and quite impressive Degree in Divinity.” 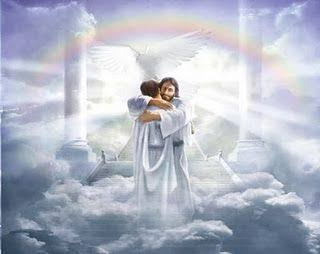