“Pride obscures God.  If you would obtain heavenly help, put away your pride; every hair of pride shuts off saving light, as it were, by a great cloud.”  [UB 131:7:3]

Thought Adjuster: “How many situations have you encountered when your or others’ prideful demeanor stood in your way? Pride deserves its reputation as an irredeemable troublemaker.  It has been conducting its illegitimate business brazenly for a very long time, overstepping the boundaries of considerate civility.  It is a culprit in both the planetary and personal turmoil you endure.  Let us play the ‘what if’ game.

What if Lucifer’s ego had not over-inflated, driven by an incommensurate sense of pride? What if he had been introspective and wisely turned to other enlightened beings for advice?

What if Eve had deflected the flattery of those whose ulterior motives were to catch her off guard and cause her fall from grace?  Flattery is the act of giving excessive compliments, generally to ingratiate oneself with the subject, appealing to his or her sense of delusional pride.

What if Abel had been compassionate toward his disappointed brother, instead of digging the knife deeper into his emotional wounds by bragging—being excessively proud and boastful about the fact that his offering was accepted while Cain’s was rejected?

What if Judas had humbly admitted to Jesus the severity of the emotional battles raging within him?

Those are examples of the recurring drama caused by the sting of prideful behaviors and the violent allergic reactions they unleash.  What about your life?  You can undoubtedly pinpoint crucial moments when pride slammed the door shut to a divine intervention of sorts, thus handicapping your personal growth. What makes it more difficult to curb is its element of surprise.

Pride ‘obscures God’ by blinding those it overcomes.  It impairs your sense of discernment, placing you into a ‘me-against-them’ or ‘me-over- them’ predicament.  You zoom in on their perceived flaws while overlooking yours—the elephant in the room.

Your highest priority should be to dismantle your pride—piece by piece—as it heralds violent emotional disturbances.  How quick your world would fall into alignment with its brilliant destiny if its inhabitants would swallow their rebellious pride!” 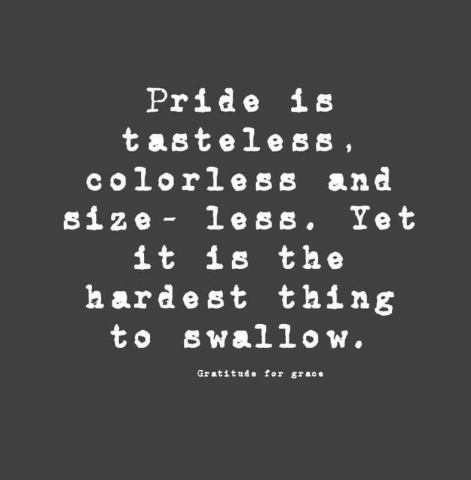