Thought Adjuster: “After putting on your noise-canceling virtual headphones, you hand Me the talking-stick, with the request that I elaborate on the above statement.

The unfortunate and impulsive misalliance of anger with hate stinks to High Heavens because their volatile synergy unleashes powerful, unpredictable, and devastative emotional tsunamis.  Lacking clear-headedness, such a virulent association cannot develop viable strategies to remedy the widespread toxic dysfunctions that plague these chaotic times.  Instead, it dangerously escalates the crisis.

Beware of treacherous misinformation, purposefully circulated to get you to ‘blow some fuses,’ thus adding you to the staggering numbers of war casualties.

Jesus dealt with highly challenging predicaments, as His character came under the relentless attack of those made uncomfortable by its flawless mirror effect.  He prioritized self-mastery—a wise move on His part.  By focusing on His soul development, He quickly deflected the adversarial infiltration efforts of foreign elements intent at jeopardizing the integrity of His character.  He was keenly aware of the need to devise new response patterns when faced with the ‘same old, same old’ and sadly foreseeable human behaviors.

When anger and hate master you, they dangerously dictate your actions, claiming mastery over you. How could you expect positive outcomes? The Law of Cause and Effect does not allow for such ‘miraculous’ turns of event.  There are no exceptions to that rule.

Be aware of the power of manifestation of your spoken word.  Take a thoughtful pause before talking. After crossing the last checkpoint of your lips, your words morph into energetic entities.  How else could they leave such a lasting imprint on the heart of their recipients? What vests them with such power is the emotional connotation of their delivery.  They can inflict great harm when hurled without restraint.

On the other hand, self-mastery practice prompts you to take a time-out before a constructive comeback.  It is how Jesus proceeded.  He did not let intrude in His personal space the belligerent suggestions of his peers who had been taught the ‘one eye for an eye’ reactive pattern. 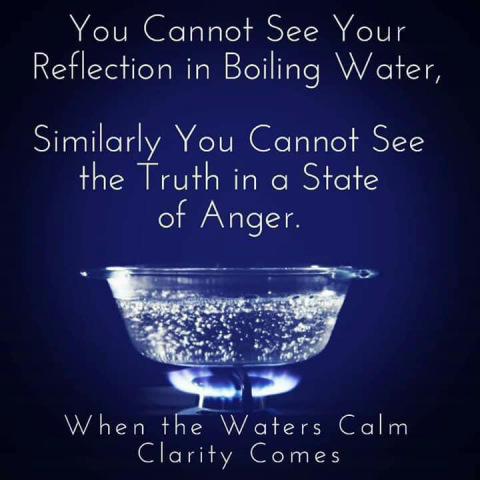