Thought Adjuster: “Many strong qualifiers are used to define the word Defeat: crushing, bitter, humiliating, stinging, catastrophic, devastating, and so many more. What does such a wealth of vocabulary hint at?

“It tells you that defeat is very much a part of the human experience. Such negative connotations also suggest that most of you do not know how to cope with what you perceive as setbacks and even take as personal insults. They may appear so if you look at them from the outside instead of turning within to detect their positive contributions.

“If you experience them as humiliating, what does it tell you about your sense of pride? If you deem them catastrophic, doesn’t it imply that you view them as terminal and unredeemable?

“In the big scheme of things, evolution is fraught with defeats and victories—and defeats morphing into victories or victories turning out to be setbacks.  The silver lining of failures is what helps you assess where you stand in your spiritual growth curve.

“Once awakened to the spiritual reality and understanding that you are evolving toward the godlike perfection of your being, defeats merely amount to road posts. Some of them admonish you to make a detour; others tell you to go on at your own risk; others yet urge you to persevere, pointing out that a setback is an educative episode than can be welcomed instead of resented.  It all boils down to YOUR attitude toward defeat.  "There is an art in defeat which noble souls always acquire…" [UB 160:4:13]

“Will you remain inert on the mat of the boxing ring, or will your fighting spirit make you quickly bounce back on your feet, reassuming your upright stance?  Are you objectively assessing the damages you would incur if you give up prematurely?  Indeed, their tally is only final IF you give up.

“On a spiritual level, defeats amount to new challenges—they challenge you to your core, revealing the weakness of your persona that will be turned into strength once you face them instead of avoiding them.

“The Father Himself is not disappointment proof.  However, knowing the beginning and the end, He never allows Himself to be disheartened. Like a skillful chess master, He makes innovative moves to bring His Great Plan to fruition.  Will you be one of His winning pawns?  It is up to each one of you to rise to such fertile occasions.” 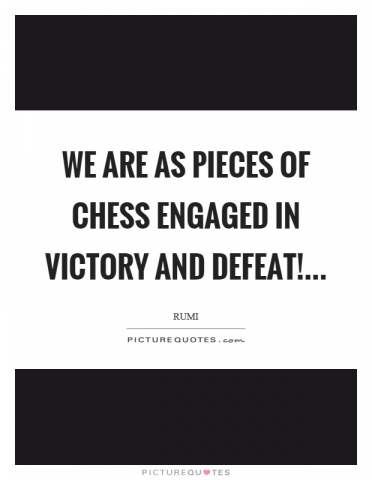