“All too often, when we battle for the right, it turns out that both the victor and the vanquished have sustained defeat.  I heard the Master say only yesterday that the ‘wise man, when seeking entrance through the locked door, would not destroy the door but rather would seek for the key wherewith to unlock it.’” [UB 160:3:4]

Thought Adjuster: “The question one needs to ask is, “How do I battle for the right?” “Does the end justify ‘mean’ means and under the belt blows?” It is, indeed, where history—personal and generational—has gone very wrong.

“The Crusades, the Dark Ages, and the Inquisition are the sad legacies of times when the self-proclaimed ‘righteous’ inflicted terrible torment on those they wanted to ‘reform.’ They actually reached the opposite outcome, turning many away from what could have become their spiritual lifeline.

“On the other hand, your Master Jesus vindicated the divine right order by living a righteous life prompted by the desire to debunk the lies and spiritual deception that held many captives in spiritual dark ages. He regenerated his soul by contemplating the beauty of creation and taking frequent meditative time-outs. As well, He always took the high road—the way that contained the most goodness. Such are the ways of love-in-action.

“The modern political or religious rhetoric still causes many to ‘justify’ the worst of behaviors. Hate-in-action resorts to slanders, mud-slinging, defamation of character, spreading of unverified rumors, judicial errors, protection of the guilty at an added cost for the innocents, and more. Indeed, when human beings operate under such faulty and uncalled-for parameters, “both the victor and the vanquished” are losers in the process.

“Jesus became the brave contender of the unrighteous and iniquitous ones. He emerged as the unchallenged World Champion of Divine Justice by always sticking to the Golden Rule.

“In these difficult times of world-wide confusion, you will be an uncontested winner in the Father’s Eyes if you abide by the only Law promulgated by Jesus in His Name. Stick to the Golden Rule, and it will bring about the golden days of Light and Life! It will heal the broken hearts—yours included. Love-in-action is the only constructive way. Do not allow others to convince you otherwise.  Initiate the salutary change you want to see in the world instead of repeating the same old and costly mistakes by following the beaten paths of iniquity, filled with sinkholes that make for a very treacherous and backbreaking ride.” 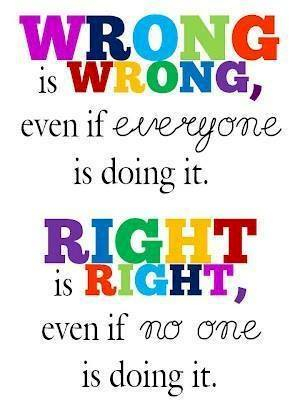