“The love of the Father absolutely individualizes each personality as a unique child of the Universal Father, a child without duplicate in infinity, a will creature irreplaceable in all eternity.”  [UB 138:04]

Thought Adjuster: “Why would the Father go through so much trouble to ‘individualize’ you?  The Bible colorfully depicts the emergence of Eve out of one of Adam’s ribs—the feminine out of the masculine.  Instead of perceiving this as a co-dependency, it is far better to look at it from the perspective of co-commitment and collaboration—resulting in co-creatorship.

“You could say that the Father’s Infinite Personality encompasses the seven primary colors, the seven main musical notes, and more.  These fundamentals get blended ad infinitum as the Master Creator Self-expresses in and through each one of His creatures by carefully selecting a ‘designer hue’ to define their stunning personality with loving and painstaking strokes.  You are unique on the outside, and you are unique on the inside.  You are deeply moved when the Father plays ‘Our song’, the love song He composed thinking of you and that never fails to find an echo within your heart.

“The Father does not mass produce.  Instead, with the collaboration of myriads of intelligent beings, He goes to the drafting board for EACH ONE OF YOU.  It does not imply that you are a prototype.  You are AN ORIGINAL!

“To take it a giant step further, in His Leap of Faith, He intends to someday fuse with your unique personality—to become you, as you become Godlike!  It is your return ticket to the First Source and Center bringing your valuable gifts—a cornucopia of the fruits of His very Spirit that you help yield during the four short seasons of your material life.” 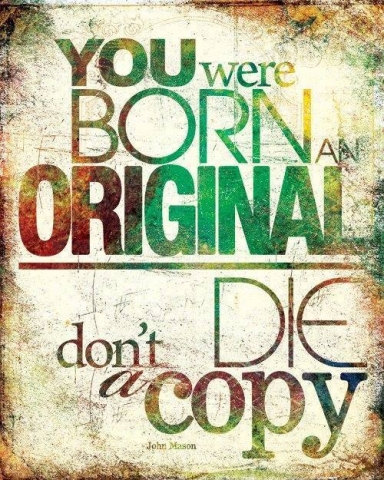