“Behold God and man! … In his matchless life he never failed to reveal God to man.  Now, in these final episodes of his mortal career and in his subsequent death, he made a new and touching revelation of man to God.” [UB 186:2]

Teacher Uteah: “When you study the Life and Teachings of Jesus, one thing becomes quickly evident: His life WAS His teachings. Why else would it have been necessary for Him to incarnate in the human flesh as a Teacher of men?

“What human creatures needed the most was for one of them—the Son of Man—to be accepted by the “supreme ruler of the universe of universes… as the satisfaction of the ideal of the mortal creatures. [UB186:2] Such a breakthrough would significantly raise the bar of human consciousness and create a much overdue precedent for human self-realization.

“In the tragic final episodes of His human life, the stark contrast between the dual nature of humankind was exposed. Those who put Jesus to death revealed to the Father in Heaven the ugly traits of the fallen human nature: deceit; self-centeredness; utter disregard for Truth, Beauty, and Goodness; cruelty; disrespect, and more.

“Jesus remained composed and dignified in spite of the avalanche of iniquity that befell Him, clearly aiming at making Him look like a fool and a looser. His enemies were unable to make Him sink to their shameful level, and Jesus was the uncontested winner in this spiritual battle. By doing so, He became the perfect specimen of a human being, an original and inspirational human success story.

“By following into His spiritual steps, you can become yet another revelation of ‘humanity’ to the Father, as you possess a unique personality endowment. Jesus lived His life both in His Name and yours. He revealed to the human species its potentials for godlikeness; as well, He set an example on how to reflect back to the Father the fullness of a perfected human personality. He did it as a proxy for humankind until such time as you can individually follow suit.” 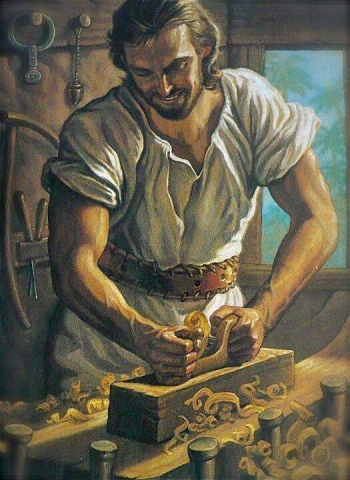