“Justice makes a nation great, and the greater a nation the more solicitous will it be to see that injustice shall not befall even its most humble citizen.  Woe upon any nation when only those who possess money and influence can secure ready justice before its courts! … Civil government is founded on justice, even as true religion is founded on mercy.”  [UB 132:4:8]

Thought Adjuster: “There cannot arise an amicable and flourishing civilization on Earth as long as there is no justice for all and a blatant disregard of the fundamental human rights, including equal access to mental, physical, emotional, and spiritual health care.

When a government fails to meet its citizens' basic needs, they may reach a point of irrepressible indignation and take matters to the streets in the last recourse, since those elected to represent the public interests are shamelessly breaking their campaign promises.

To be an impartial referee, the justice department has to operate independently from the government's other branches.  Only injustice is for sale—never justice!

Citizens have the right and the duty to bring attention to the miscarriages of justice to see that they get corrected. Governments are in the ‘service industry’--their official duty being to serve the highest good.  Whenever they break the Golden Rule, it is the judicial body's sacred duty to step in and enforce laws enacted to protect each citizen's rights or amend them if flawed.

Those safety valves have been wisely set in place to allow for a peaceful resolution of conflicts, as peace is the most prized achievement of a healthy civilization.  Jesus was both a determined peacemaker and a brave human rights activist.  He campaigned--non violently--for the divinely-ordained, fundamental, inalienable, universal, and egalitarian rights of every member of humankind. Remarkably, He was the first advocate for women’s rights.

Such is the impeccable fairness of the justice system enforced On High—a merciful approach that takes into account all attenuating circumstances of the party standing trial and whose enlightened verdicts always support its full rehabilitation.” 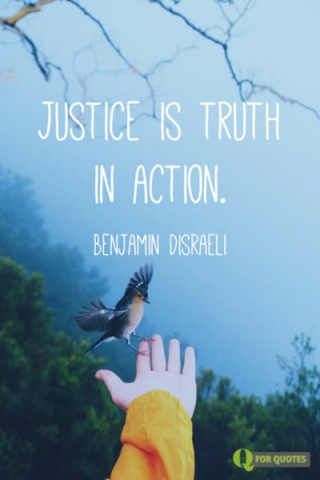