Etymology of the word Courage: from Latin cor ‘heart’.

Thought Adjuster: “Your world, troubled as it is in a myriad of ways, is the stage of many heroic acts.  The heroes are those who make a positive contribution by selflessly following the brave prompts of their heart.

“Indeed, courage is felt at your very core. It lends a deaf ear to the cautioning of your mind, leading you to take bold action in a dangerous situation.  Such inspirational initiatives make significant contributions.

“Unbeknownst to many, both you and the animal kingdom have access to the influence of the Adjutant Mind Spirit of Courage.  Planetary life has much to do with the survival of the fittest, which could also be worded as the survival of the bravest—those willing to jump into action amid great adversity.

“What would your life journey look like if you had shied away from taking any courageous initiatives?  First of all, you would probably suffer from poor self-esteem, as nothing is uplifting in being a coward.  Secondly, you would have remained quite stagnant in your evolution, as courage is a powerful forward driving force.

“It does require courage to speak your truth when it differs from the established belief systems.  Many brave souls, ridiculed and even put to death for their innovative opinions, were celebrated postmortem as groundbreakers.

“The more you grow in Spirit, the more you advocate for Truth—with a “T.”  It could not be otherwise, as the pursuit of Truth, Beauty, and Goodness brings you in alignment with the Divine Vision for your life.

“Speak up; take courageous actions; by becoming a champion for Truth, you will come to embody It.  It is how Jesus led His human life.  His acts of bravery caused His execution on a wooden cross, but they also blazed a trail to eternal life.  By taking to heart the doing of the Father’s will, you will be prompted to perform many anonymous acts of selfless service that will propel you forward by leaps and bounds—leaps and bounds of unwavering faith.” 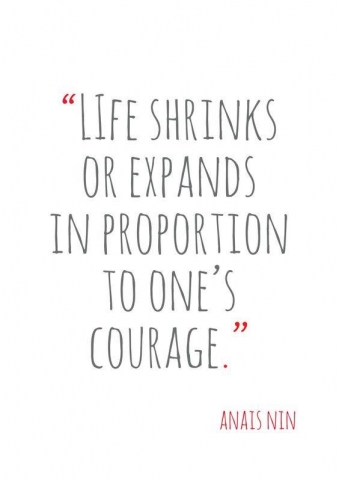