“A warrior king always entered a city riding upon a horse; a king on a mission of peace and friendship always entered riding upon an ass.  Jesus would not enter Jerusalem as a man on horseback, but he was willing to enter peacefully and with good will as the Son of Man on a donkey.”  [UB Paper 172, Section 2]

A person's rank was reflected by the size of the horse he rode. A noble or person of importance would ride a large and expensive horse. The phrase “on one's high horse” came to mean “superior.”

Teacher Uteah: “Toward the end of His earthly ministry, Jesus made a very daring public entrance in Jerusalem riding on the back of a donkey. Such a deliberate decision made Him a target of ridicule by His detractors and greatly puzzled his disciples.

“Jesus knew that the time of his apprehension by the Sanhedrin was coming near and wished to make a last poignant and thought-provoking silent statement.  Going against the grain of the public opinion, He had continuously proclaimed that the kingdom He came to establish was not of this world—a point that failed to fully register among to His apostles and followers.

“It is one of the reasons why He selected to enter Jerusalem humbly riding on the back of a donkey—publicly asserting once again that He had not the slightest interest in staging a coup to overthrow the current political regime, and that He presented no threat to them.

“Whenever He came to a dangerous crossroad between pride and humility, Jesus always selected the path of humility.  While His apostles were lobbying for the place of honor at the dinner table, He knelt before them to wash their feet, assuming the attitude of a servant.  In a similar fashion, He selected a donkey over a horse as a fitting mount to make His public entry into Jerusalem.

“While subjecting Himself to harsh criticism, He made a powerful and lasting impression.  Never did He exhibit a superiority complex.  Rather than ‘mounting a high horse’, He chose a modest mount to appeal to the heart and minds of His observers and nudge them to higher levels of spiritual understanding.  Frequently, unpredictable behavior acts as a catalyst for deeper thinking.

“Ponder this event.  How you would have reacted if you had seen Jesus riding a donkey?  Would you have felt embarrassed?  Would you have ridiculed Him?  Or would your heart have been deeply moved by such a scene?  Jesus always redirected the spotlight away from Himself and toward His Heavenly Father.  His humility was baffling, mind-boggling, and anti-climactic to those who wanted to crown Him king.” 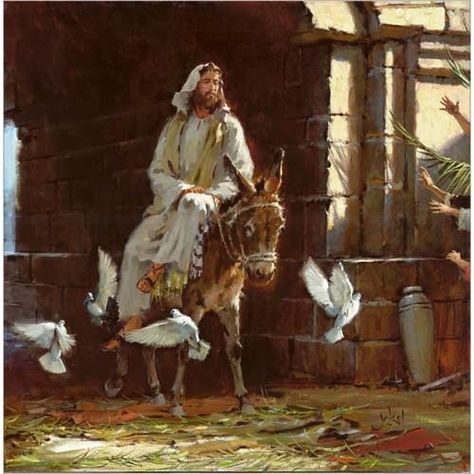