“When a wise man understands the inner impulses of his fellows, he will love them. And when you love your brother, you have already forgiven him. [. . .] The child, being immature and lacking in the fuller understanding of the depth of the child-father relationship, must frequently feel a sense of guilty separation from a father’s full approval, but the true father is never conscious of any such separation. Sin is an experience of creature consciousness; it is not a part of God’s consciousness. [UB, 174:1.4]

Thought Adjuster: “From the above statement made by Jesus about the forgiveness of sins, one can imply that, because sin is not part of his consciousness, God does not perceive sinful behaviors as punishable offenses of lese-Majesty. He cannot take sin personally. He IS and, therefore, fully inhabits each now moment. His Carpe Diem mentality combined with the unconditional nature of his ever-outgoing love substance keeps him grudge-free.

Jesus grasped that ignorance and the harboring of hateful prejudices are the main culprits in men’s misguided deeds. They make them accessories to petty or more serious crimes by blindsiding them. Paradoxically, such behaviors arouse compassion in a parental heart—a byproduct of unconditional love, which nullifies the need to forgive.

Iniquity is a more serious offense, as it is espoused knowingly,’ in blatant disregard of divine law and order. The ten commandments etched in stone were a PowerPoint presentation of what to ‘beware of.’

Due to the Luciferian legacy, humankind suffers from severe spiritual handicaps and often fails to get things right the first time. The painful backlash of such catastrophic mishaps yields unpleasant feelings of shame and guilt, making it difficult for them to look at the Father in the eyes. Yet, he never withholds his affection from his children, as love is his nature.

One could say that forgiveness is part of human affairs. By emulating Jesus’ godlike mercy toward errant souls, you too will reach a point of no return to the past. Bygone events won’t remain stuck in your throat, requiring a tricky spiritual hemlock maneuver to get dislodged. Become aware of unhealthy fixations that constantly rekindle the ashes of the past. Sever such unhealthy attachments by acts of conscious acts of forgiveness—to the self and others—thus setting yourself free to immerse yourself in each present moment—no strings attached.” 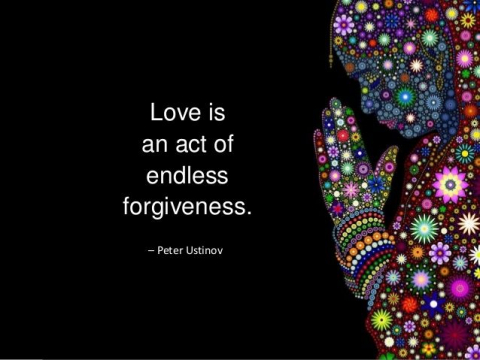