“Men all too often forget that God is the greatest experience in human existence. […] When men search for God, they are searching for everything. When they find God, they have found everything. The search for God is the unstinted bestowal of love attended by amazing discoveries of new and greater love to be bestowed.”  [UB 117:6:9]

Thought Adjuster: “How sad that, for so many, the quest for God has been relegated to an optional extra-curricular activity. It most certainly is optional, as it requires a free-will decision on your part.  However, such a resolution is of paramount importance to the activation of your potentials and the development of your soul—the vehicle that will transport you throughout eternity if you take good care of it, thus providing it with unlimited mileage.

For many, the topic of God has become taboo or disturbing. They have made up their confused mind to reject His Omnipresence and campaign to convince others of such nihilistic beliefs.  No matter how successful they are in other areas of their life, they will never be satisfied.  Why?  Because God IS everything, and there will always be much amiss if they do not experience the fullness of His Love.

Isn’t the quest for love a primal motivator in human decisions?  It is so because this innate impulse, when acted upon, makes you vibrationally ‘ascend’—provided it is altruistic.  As you climb the emotional ladder, you will reach its upper rungs and become increasingly cheerful, joyful, and even blissful.  Self-centered love does not have such an impact.  Its self-containment deprives it of being ‘free-spirited,’ thus suffocating its altruistic impulses and turning your heart into a 'no-man’s and no-God’s land'—a Forbidden City.

If you admit to the possibility that there is a God, isn’t it foolish not to investigate it further? God is a Giver in all that He does. Life is a gift; free will is a gift; imagination is a gift.  Those gifts are purposeful, as God’s creative work is intentional.  Once you uncover their loving objective, which has everything to do with YOUR calling, you will put them to the highest practical use instead of ignoring their intrinsic value.  Your heart will then thrive as a Sanctuary City.” 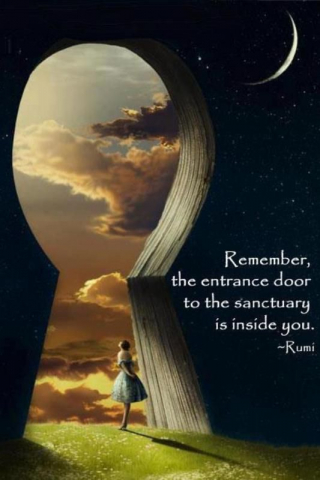