Lot was the nephew of the Old Testament patriarch Abraham. He was a man who seemed to be significantly influenced by his environment. As long as he accompanied his godly uncle Abraham, he managed to stay out of trouble. But when he got away from Abraham's good example and moved to the city of Sodom, he was distressed by the evil going on about him. Yet, he did not work up the initiative to leave Sodom. God considered Lot and his family righteous, so he saved them. On the verge of Sodom’s destruction, two angels led Lot, his wife, and two daughters away. His wife turned and looked back. Immediately she turned into a pillar of salt.

Thought Adjuster: “The irrefutable evidence of planetary dysfunction adversely impacts the emotional wellbeing of this generation. Many of those professing to follow in the footsteps of Jesus have defected to the side of the people of the fear, a far cry from the can-do attitude exhibited by the authentic people of the faith.

The weight of the world did rest on Jesus’ human shoulders, as he assumed the staggering responsibility to be a planetary savior. How could he remain upbeat despite so many cruel, personal and collective disappointments?

A defeatist attitude will yield more setbacks due to the universal law of attraction. Just as Lot’s family was advised not to turn around to look at Sodom, people of faith should refrain from obsessing about the ambient gloom-and-doom that metaphorically turns them into unproductive pillars of salt—cursing them with debilitating depressions.

Your imagination holds great powers of positive manifestation. Stop playing a part in the global dysfunction you denounce. By envisioning best-case scenarios, you set the co-creative wheels of positive change into motion, thus exerting a positive countereffect on the influx of bad news, which, if given free rein, keep adding to the festering pot of toxic emotions—a loose-loose predicament.

Jesus judiciously CHOSE to keep his sight focused on the objective of the ages—light, and life. It is how he acquired emotional self-mastery during his short earthly sojourn. His inspirational ‘Follow Me’ admonishes YOU to adopt a similar emotional stance, thus developing immunity against the demotivational victim mentality. Focus on the solutions instead of obsessing about the problems.” 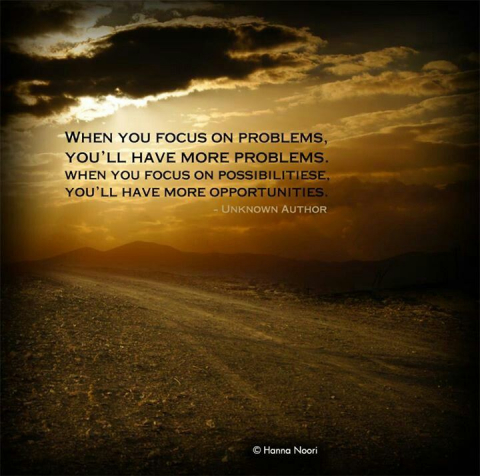