Thought Adjuster: “The human Jesus early concluded that He did not want to leave behind anything in His handwriting.  The reason for such an informed personal decision was that He had to deal with many people whose faith hung on to the compilation of words frozen in time and coined as Holy Scriptures.

“Sadly, their sticking to the letter of such outdated spiritual interpretations prevented them from being receptive to the refreshing and soul-liberating ‘live broadcasts” of the ‘forever-living truth’ made by Jesus, a Spirit-led man.

“Rather than compiling His teachings in writings, He often drew His lessons in the sand to be later lifted by the passing winds.  What He wished was for His spoken words to fly away into the hearts of His audience to become etched on their walls.

“True enlightenment occurs in the heart.  It goes way beyond mere intellectual understanding, as truth has to be practical to be acted upon—not just acknowledged.  How else could it unleash its innate power to make perfect sense of your life and the world you live on?

“Whenever you feed your mind the nectar of truth, pray that it may find its way to your heart. Take a moment to reflect upon the truth disclosures that most positively impacted the way you lead your life.  See how they transformed you from the inner. Indeed, head and heart function optimally in partnership.  Truth with a “T” ALWAYS resonates within the heart, as it is one of the main attributes of the Father’s Loving Essence.” 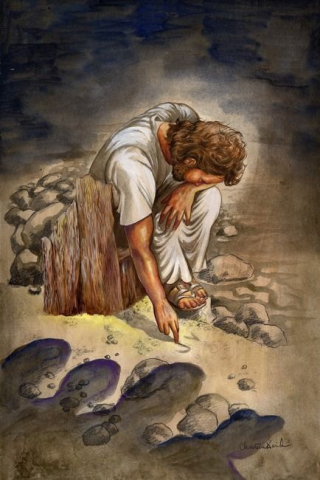