“Prayer is not a technique of escape from conflict but rather a stimulus to growth in the very face of conflict.”  [UB 1002:05]

Thought Adjuster: “What is effective prayer?  It is indeed “a stimulus to growth” if you use it as a ‘resource’ to help you cope with challenging and demanding situations while keeping the overall highest good in mind and heart.

“Jesus went as far as to say “Pray for your enemies.”  What a shocking and thought-provoking statement it was for those who had been raised to believe that the retaliating practice of “an eye for an eye” was justified when subjected to someone’s wrongdoing.  To further bring His point home, Jesus added: “If anyone slaps you on the right cheek, turn to them the other cheek also.”

“How do you pray for your enemies?  Prayer should not be ‘weaponized,’ intent at twisting God’s arm to favor one party over another—lobbying for personal blessings while petitioning for misfortunes to befall your adversaries and ‘badmouthing’ them to God.

“Effective prayer serves the highest good.  By praying for your adversaries, you keep your heart open and act as a pro bono intercessor, rather than a detractor and prosecutor.   Not only does it trigger a mighty change of heart within you, but it also generates the positive and disarming energies of goodwill toward those who demonstrated ill-will toward you.  Thus doing, you are turning the tables—leaving no room for conflict escalation, but shifting the situation toward a peaceful resolution.

“While nailed on a wooden cross, Jesus’s prayers were for His tormentors.  Such is the living and shining example He set while dying in agony on the cross.  Before taking His last human breath, He harvested a few more souls for the Kingdom.  How many souls could you win over by living by His example?

“Prayer also provides a beneficial timeout where you consult with the Father and receive His feedback as to how to respond in any given situation.  It allows you to cool your heels and your head rather than overreacting under the spell of destructive anger.  Prayer keeps you grounded in the present moment and gives you unrestricted access to the peace that passes all understanding.” 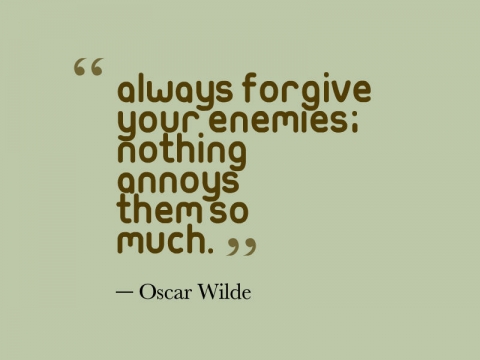