Thought Adjuster: “God’s Will aims at adorning His Master Piece with the finishing touch of Light and Life—the soft lighting that brings out its spellbinding beauty.  It is a gigantic, yet doable undertaking, as He set in place all the bells and whistles required to manifest His Grand Vision.  He IS Divine Harmony fully invested in the Here and Now—the universal time zone.

“A General Contractor hired to erect a magnificent Cathedral has to enlist various corps of craftsmen to ‘real-ize’ the architect’s vision. If the craftsmen decided to walk out the construction site, the Cathedral would remain a figment of the architect’s imagination, never brought to the light of day.

“Many master tradesmen are vital links in the building of a Cathedral:  A quarryman, a stone cutter, a sculptor, a mortar maker, a mason, a carpenter, a blacksmith, a roofer, and a glassmaker.  Each one relies on other trades to keep them at work.  For example, the blacksmith makes all the metal tools required while carpenters make the wooden handle for these tools.

“The Father is the Great Architect, and the successful ’s implementation of His intricate blueprints depends on the cooperation of His will creatures. It is crucial that they enlist as willing participants in the co-engineering of the Great Plan.  It suffices to sincerely say: “Your will be done, as I am the instrument of Your Will.”  By doing so, you assume your micro-percentage of responsibility.  Insignificant as it may seem, it matters much.

“Each recruit strengthens the workforce, speeding up the forward evolution of the project.  As well, each has unique talents that would be sorely missed if they were unwilling to contribute to the Great Cause.

“Ask yourself: “What is mine, and only mine to do?”  By doing so, you will stop waiting for others to take the lead.  Once you identify your ‘professional calling,’ enlist in the Corps of Light Workers and focus on your designated work area.  It will make your life ‘meaning-full’ and your actions will have a positive impact on the overall welfare.

“The construction of a Cathedral is a lengthy process, and the first crew may not live to see its completion.  However, the memory of their fingerprints will remain forever etched on the heavy stones they positioned to serve as supportive cornerstones.  The painstaking laying of such a framework is just as significant as the crowning touch that consists in erecting the steeple for all to see from near and far.” 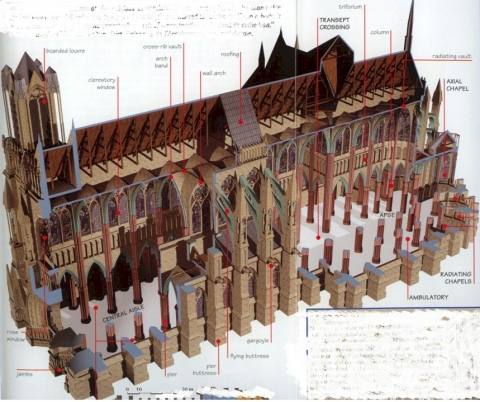