Moses was born in a time when his people, the Israelites, an enslaved minority, were increasing in numbers, and the Egyptian Pharaoh was worried that they might ally themselves with Egypt's enemies. Moses' Hebrew mother, Jochebed, secretly hid him when the Pharaoh ordered all newborn Hebrew boys to be killed to reduce the population of the Israelites. Through Queen Bithia, the Pharaoh's daughter, the child was adopted as a foundling from the Nile River and grew up with the Egyptian royal family. After killing an Egyptian slave master because he was smiting a Hebrew, Moses fled across the Red Sea to Midian. God sent him back to Egypt to demand the release of the Israelites from slavery. [Wikipedia]

Teacher Uteah: “I am ever-eager to share messages from the heart. Indeed, it is what any teachings from On High boil down to. Have you ever thought about it that way?

“Certainly, humankind needs to be provided with answers to its many existential questions. Life can only find fulfillment when in alignment with its calling which should be everyone’s priority to find it out at an early age. So many precious opportunities are squandered by those who aimlessly wander through life.

“Moses left the Egyptian palace, where he was raised with all the perks of material wealth, to become the homeless leader of the Jews in search of a homeland. He had identified his life purpose and did not resist it. How else could anyone be a spiritual leader who prioritizes the accumulation of material wealth and sensorial gratification?

“Are you still held captive in the glass palaces of material comfort? Or are you engaged in the rewarding quest for YOUR promised land? What is it that would bring you fulfillment and a sense of belonging? What is it that would bless you with peace of mind and peace of heart so that, at the end of your earthly sojourn, you would gladly look back at your life and fearlessly look forward to your after-life, knowing that it will eventually ‘materialize’ the elusive promised land you were searching for?

“Dear ones, rather than following the money, follow the deepest aspirations of your heart. Its rich content will come to shine through the many acts of higher service that you will perform from that beautiful core of goodness.” 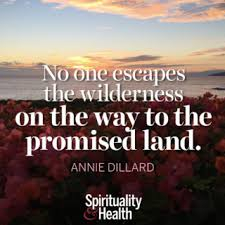