The head of safety matches is made of an oxidizing agent such as potassium chlorate, mixed with sulfur, fillers and glass powder. The side of the box contains red phosphorus, binder, and powdered glass.

Thought Adjuster: “The entire creative process has been meticulously and methodically engineered. The formation of space cannot be dissociated from the introduction of the element of time. With the onset of time management, ‘chrono-logical’ events took place in ‘logical’ sequences.

“The Life Carriers imported the ‘starter-kits’ for the vegetal and animal kingdom which acted as Petri dishes or test tubes for the emergence of the first human beings. Each progressive development could only take place upon a ripe foundation—neither prematurely, nor belatedly.

“The same applies to your spiritual evolution. You all grow at your own pace. You may be exposed to similar catalysts for spiritual awakening or growth. Yet, if the time is not right in your personal development, these catalysts won’t act as such. What do I mean by that?

"By striking a match against the side of its box, a spark is generated that yields a light- and warmth-generating flame. You are like matches. What prevents them from lighting up? Are they deficient in one or more of the elements that make them fully operational as matches? Have they collected moisture? Are they estranged from their boxes?

“Who is going to strike the match against the side of the box? It is the catalyst I am hinting at. Life circumstances will aim at bringing these two elements into contact. As well, at times, a match may be lit by direct contact with another ablaze element.

“The Father never rushes the pace of evolution. Through His Indwelling Presence, He monitors the growth curve of each one of His children of time and space closely. Your Divine Thought Adjuster works at prepping your mind to be ‘flammable’—to be lit and enlightened by the sparks of truth it comes in contact with. Once set on fire for God, it will become another independent catalyst for spiritual rebirth.” 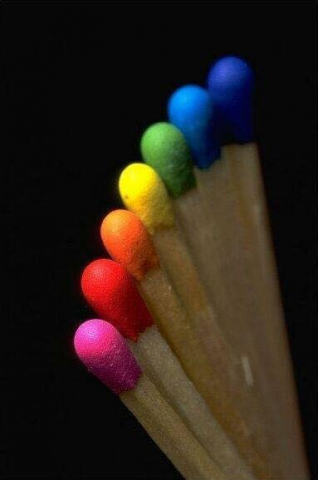