Thought Adjuster: “Peace and love are the optimal driving forces behind a flourishing civilization.  Therefore, they need to be exalted.  The Son of God came to dwell among you, and His message was pacifist and compassionate. The Prince of Peace was also the Prince of Love.  He sincerely loved the shunned ones, awakening them to their intrinsic value.

Love is colorblind. So was Jesus.  Love is a free spirit that blesses all with its sublime essence.  Jesus’s peaceful activism tackled emotional hotspots.  He always stood on the side of righteousness—tempered with mercy and compassion.

In His private and public ministry, He catered to what He identified as the most urgent needs of His interlocutor.  He debated with the philosophers and the religious figures, planting seeds of enlightenment.  He was attentive to the underprivileged, tended to the sick, defended the oppressed, and stepped in as a Public Defender. It was what made Him unforgettable.

In your world, right now, many vent highly volatile, toxic emotions.  They keep alive or resuscitate personal or historical grudges, going as far as denying many of their positive contributions to humankind.

A sound evolution uses what is salvageable from the past as a scaffolding for a brighter future. At least, it is what should happen in the divine right order.  Instead, we witness widespread outbursts of Chronic Offensiveness Disorder—the Poor-Me-Syndrome—where many operate in a constant mode of fault-finding while refusing to assume their share of responsibility.

It stands in stark contrast to Jesus's progressive attitude of instant forgiveness!  Instead of developing an unsound fixation on life's dark elements, He focused on its bright potentials.  He did not allow the relentless character assassination waged against Him by bad-faith protagonists to ‘gaslight’ Him and destabilize Him.  To their disarray, He plowed ahead undeterred, turning these malicious attacks to His soul’s advantage, thus gaining self-mastery.

Masters are keenly discriminative as to what they allow in their inner sanctum.  They turn a cold shoulder to the degrading, destructive temper tantrums of hate, anger, and disrespect, as such low-grade, toxic emotions cannot heal the very dysfunctions they caused." 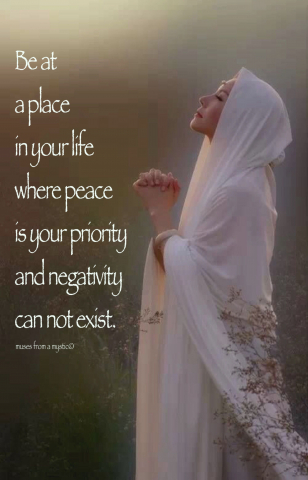