Thought Adjuster:  “Dear child, you were just reflecting upon your life and its various chapters.  You came to realize that, even though they were extremely challenging at times, you were able to successfully move through each one of them.  You were guided, guarded, and protected throughout your human tribulations.

“Many human beings would like a safety net whenever they are taking leaps of faith.  To them, it appears that they are leaping over some type of dangerous vacuum that could engulf them and there is much fear associated with moving through difficult situations.  However, the Father is not an absentee and unfit Father.  He always takes to heart the safety and the highest good of His children.  He has put many safety nets in place—even though they are invisible to the human eyes.  It requires courage and trust on your part to leap in the unknown.  This is also what makes you more “trust-worthy” in the Father’s eyes.

“Yet, you have your personal body guards—your loyal angels.  In some way, they are your glorified “nannies.”  They watch over you from a distance and are the agents of your life synchronicities.  Such synchronicities demonstrate to you that you are not walking through your life alone and randomly and that you are part of a Greater Plan that is meticulously orchestrated and monitored from higher realms.

“Rather than walking in fear, human beings would be well served to walk in faith.  Faith activates the element of courage within them.  Instead of looking down at the abysses from which they are slowly ascending and being besieged by their fear of heights, they can turn their eyes upwards toward the next rest area in their ascension journey and thus keep moving forward without being held back by fear.

“Yes, fear is paralyzing so many human beings, freezing them in their tracks.  You have not been meant to stand still.  What a poor life experience you would have if nothing “extra-ordinary” ever happened.  You would become so complacent and bored that no personal growth would take place and your potentials would remain unrevealed to you.

“Life is an adventure.  Being adventurous means “venturing” out of your comfort zone.  If you fail to willingly take initiatives that enrich your life experience, your life circumstances may change and force you to activate your inner resources to deal with them.  Therefore, such challenges are blessings in disguise, meant to make you realize that your limitations are not frozen in time but that, on the contrary, they can be stretched and that much personal growth can take place through these tests of faith.

“Each time you pass a life test, you are acquiring more experiential wisdom.  You are earning your stripes and each one of these stripe can be proudly displayed on your chest as it has been honestly earned.  Aren’t those feelings of accomplishment the best rewards?” 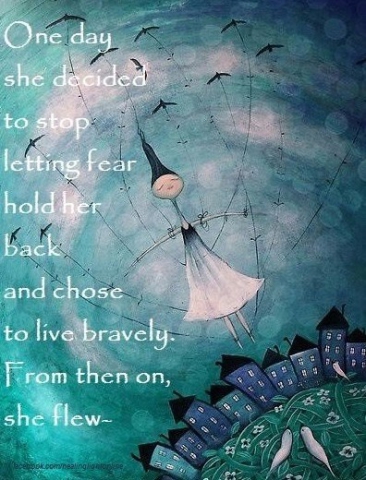